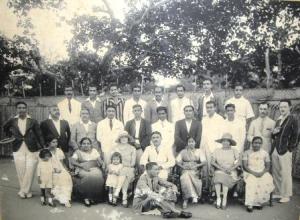 Cyril and Esme Wickremesinghe when he served in Puttlam

Cyril Wickremesinghe and Esme Goonewardene married in 1919, and were stationed in various places in the country over the next seventeen years, before finally settling down in Lakmahal at the beginning of 1937. Their eldest son, Cyril Esmond Lucien, was born in 1920. Interestingly, they moved thereafter to Ceylonese names, Tissa in 1923, Lakshman in 1927, and in between their only daughter Mukta, named in memory of the pearl fisheries Cyril had supervised when he was stationed in Puttalam.

He had risen rapidly in the service, becoming the first Ceylonese Government Agent in 1930. This was in Sabaragamuwa, and there is a wonderful portrait of him and his wife seated in state along with the Sabaragamuwa chiefs in their traditional costumes, headed by old Maduwanwala Dissawa with his flowing white beard. But even more evocative for me of that bygone age is a photograph of a much younger couple, stunningly attractive both of them, taken it seems in Puttalam, which would make it the early twenties. They are surrounded by young men in studiedly casual European sports clothes. The womenfolk are much more formal, staid almost, with my grandmother looking almost ethereal in the middle.

I was given the photograph for my 50th birthday by my aunt Ena, de Silva born Aluwihare, whose parents were of the same ilk as my grandparents. Her father Richard, five years younger than Cyril, served in the First World War, and then joined the Civil Service and married Esme’s cousin Lucille, daughter of Theodore Barcroft Moonemalle, nominated Member of the Legislative Council, who lost his seat when elections were introduced.

Sir Richard, as he later became, ending his career as the first Ceylonese Inspector General of Police, was from a brainy branch of the Aluwihares, an unusual phenomenon, deriving I suspect from his Panabokke mother. His brother Bernard, who had spent his youth as a follower of Gandhi in India, was the only major figure to leave the UNP and join Bandaranaike’s SLFP in 1951. Sadly, he crossed back before the 1956 election and, standing for Matale himself, even persuaded his brother Richard to become the UNP candidate for Anuradhapura, where he had been Government Agent many years earlier. They both lost.

Had Bernard stayed in the SLFP, he would surely have been Bandaranaike’s deputy, and the unanimous choice to succeed him. Instead there was the unseemly farce of the hierarchy being determined to prevent C P de Silva, who had been effectively deputy but came from what was deemed the wrong caste, from taking over. They swiftly promoted Wijayananda Dahanayake, who proved a disaster and then, when the SLFP lost the March 1960 election under C P de Silva, the only acceptable alternative was Mrs Bandaranaike. So history was made and Bernard, having briefly been virtual deputy in Dudley Senanayake’s March 1960 government, died and is now almost forgotten. His wife Florence Ram, who was Indian, was an unforgettable Warden of Sanghamitta Hostel at Peradeniya, and his son Arjuna was a remarkably innovative Chairman of the University Grants Commission for four years from 1989, before falling prey to the Wijetunge regime. Arjuna had been too young however to take over Bernard’s seat when he died, so the UNP turned to his nephew Alick, who was not of Panabokke lineage but seems to have established his own distinctive and it seems almost indestructible tradition in the area.

Sir Richard of course was an aristocrat himself, but I have no doubt that Esme helped Cyril to gain the acceptance he needed in the very exalted position in which he found himself. Under the British system the Government Agent was virtually king of his province and it is likely that the British, who had for many years restricted entry to the Civil Service to members of the Goigama caste, thought long and hard before setting an ordinary mortal over traditional chieftains. But Cyril seems to have succeeded admirably, and before long he was transferred to the even more important North Central Province.

Ironically, the system was to change at the very moment in which Ceylonese reached the top of the tree, for the thirties saw the Donoughmore Constitution and universal franchise and elected representatives taking over as the principal authorities in any area. But during the transitional period Cyril certainly made his mark, helped perhaps in Anuradhapura by the fact that the elected member of the State Council was the former British Government Agent Freeman. He had defeated old Krishnaratne, Cyril’s cousin by marriage, by the simple expedient of telling the peasantry he had dominated for so long that he would have to go back to England if they did not vote for him. They either loved him too much, or were too much in awe, to allow that to happen.

It was in Anuradhapura that Cyril made his mark with D S Senanayake, the Minister of Agriculture under the Donoughmore Constitution, who was determined to revive the irrigation schemes of the historical period. I remember Colvin R de Silva indicating later that his innovations were in fact based on a minute prepared by a British Governor, but in any case the credit for effective implementation should be his – and that of his right hand man, whom he later brought to Colombo as Land Commissioner when his failing health made further strenuous exertions in the field too risky.

Sadly I don’t have many records of Cyril’s work in those days, his contribution to the development of Anuradhapura New Town, his total commitment to the new colonists in his charge, the difficulties he faced as his family was growing up and his wife had to spend term-time in Colombo, in rented accommodation to keep up with the needs of the four children. But I do have a delightful booklet prepared by D S Senanayake in 1942 on the Minneriya Development Scheme, with charming old photographs. The Scheme had gone through under Cyril’s supervision, inaugurated in 1933 when D S was in fact away, having planned everything, and John Kotalawala was Acting Minister. My favourite photograph is of him felling the ‘First Tree’, dressed in a white suit with Cyril, clad similarly, with a double breasted jacket, hat in hand, standing by indulgently.

Above this there is a picture of the Minister, recognizably D S, inspecting a clearing along with ‘the Government agent and the Revenue Officer’, all three on horseback. It must have been an extraordinary life, but what comes through in D S Senanayake’s prose is the deep sense of commitment, the feeling that a new era was being created – ‘There are today in Minneriya men who came with nothing to call their own who are now living in good, well-furnished houses, and are financially much better off than many a professional man living in the towns’.