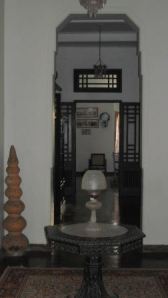 The Entrance hall at Lakmahal

l in January 1937. The Parsi architect Billimoria was responsible for the final design and construction, but the inspiration for the layout was Cyril’s.

It was an unusual design, with a long narrow front verandah giving onto three doors, two of them double, one quadruple. The main doors led into a hallway, while parallel to these was the set of four that gave onto a long dining room that was really an extension of the hall through a wide arch. It contained a table at which twelve could sit comfortably, with a wide bay containing five windows opposite the hall. Opposite the quadruple doorway was a small pantry which, by the time of my childhood, contained an electric cooker in a recent concession to the modern world. END_OF_DOCUMENT_TOKEN_TO_BE_REPLACED