Twentieth Century Classics by Rajiva Wijesinha is a good introduction to the many authors and the varied genres of literature from the 20th century – dealing with the more famous names such as Arthur Conan Doyle and Agatha Christie to more obscure names like Angus Wilson and Somerset Maugham.

As the introduction quotes, ‘a classic is a book that never finished saying what it has to say’ – thus it is important to ensure that they are always available to new audiences so the messages in them get passed on to new generations and aren’t lost in the sands of time. Sadly, many of the current generation misguidedly view 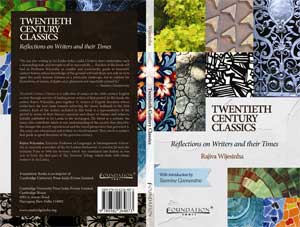 them as old fashioned, stuffy and irrelevant in today’s technology controlled world, and thus many of these literary gems have been left to collect proverbial dust. Sometimes the only exposure to these classics people of today get is due to the compulsory reading lists in school. This book aims to change these misconceptions and encourage more people to take up reading these books for pleasure.

Rajiva Wijesinha takes his readers on a tour of the leading 50 authors of the 20th century through his thoughts and musings on the works of individual authors. The sheer depth and breadth of the authors covered clearly shows he is a wellspring of literary knowledge and thus well qualified to introduce authors of a previous century to an audience in the 21st century.

The chapters in this book began life as weekly articles in a Sri Lankan newspaper column, educating a post war audience – to whom simple pleasures like literature may have fallen by the wayside through decades of conflict – on a wide range of literary works which may spark their interest. They include a brief summary of the life and times of the featured author, the recurring themes found in their works and also provide analyses of their most famous novels.

The diversity of topics covered by the author in each chapter not only gives the reader a good grounding in the works of each author, but also exposes the reader to various historical, social and personal topics of the previous century and shows us that the messages in their works are timeless – for example what it takes for civilised values to be lost in the face of war and conflict, and how history can be shaped in a negative way purely by the destructive desire for revenge.

The author’s choice of writers to include is extremely varied. Some are chosen for providing a single interesting, enjoyable and through provoking work. Others are picked due to works being able to give messages and lessons which can be applied to solving the challenges faced in our day to day lives.What links them together is that theyr cover the full gamut of emotions known to mankind. What’s more, the genres which these featured writers work in include everything and the kitchen sink, so to speak: from children’s literature to tragedy, historical to sci-fi and comedy to mystery and romance, as well as those which are simple thinly veiled social and political analyses. Though the author is currently a member of the Sri Lankan Parliament, his studies of English literature at Oxford and his love of books and his many years of experience reading practically everything under the sun clearly qualifies him to give an unbiased and sincere view of the books that were the cornerstones of the 20th century to a new generation in the 21st century.